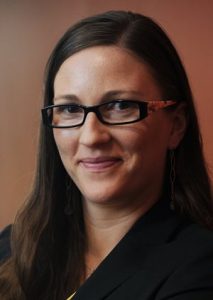 Heather Scavone joined Elon University School of Law in 2010 and currently serves as the Director of the Humanitarian Immigration Law Clinic, which represents refugees, asylees, asylum seekers, parolees, certified victims of trafficking, and Iraqi/Afghani Special Immigrants with immigration benefits applications including adjustment of status, affirmative asylum, family reunification and naturalization. Since the clinic’s creation in 2010, it has served more than 1,600 refugees and asylum seekers under Scavone’s leadership, making it one of North Carolina’s most prolific nonprofit immigration legal services providers.

Prior to joining Elon, Scavone directed the statewide Immigration Legal Services program of Lutheran Family Services in the Carolinas, which provided representation to hundreds of refugees and political asylees each year. Scavone chaired the North Carolina State Refugee Office’s Immigration Committee from 2005-2011, and serves as its chair currently. She is an expert on immigration legal issues affecting family reunification benefits for asylees and refugees and has been asked to present at multiple nationwide forums on this subject. In 2015 Scavone received the University’s Periclean Award for Civic Engagement and Social Responsibility. She is a cum laude graduate of North Carolina Central University School of Law, where she earned a J.D., and from Guilford College, where she earned a B.A. in French. Scavone is fluent in both the Italian and French languages. Scavone now sits on the board of directors for Every Campus a Refuge.