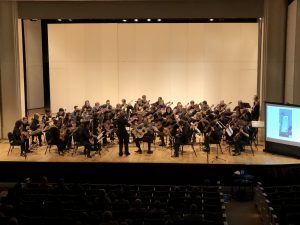 On Thursday October 4th, Guilford College and the surrounding community listened while over 50 guitars conversed with one another. “The Walls” was composed of three parts: four solo pieces by William Kanengiser, a lecture series by Guilford College professors, and five pieces by a guitar orchestra. The evening began with a piece reminiscent of the rhythm of the Spanish Flamenco dance tune. Appropriate to the context in which the song would normally be heard, William’s fingers danced along the neck of his guitar, building slow crescendos and culminating with upbeat fortes. He opened the piece “Sevillana” by saying that anybody can play its intro: a simple strum on open guitar strings. This theme of openness and accessibility, of acceptance and ample opportunity, echoed not just in the cords played in this piece, but throughout the rest of the evening too. 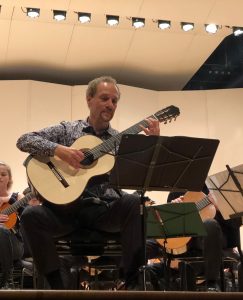 Recognized as one of America’s most accomplished classical guitarists, William Kanengiser sits on the Board of Trustees for the Guitar Foundation of America. He is one of the founding members of the Los Angeles Guitar Quartet (LAGQ), playing everything from jazz to classical on an international stage. In 2005, Mr. Kanengiser and LAGQ won a Grammy award for Best Classical Crossover album.

The second half of the program featured four guest speakers, each providing information about a different wall and its unique history. These introductions were made by Dr. Zhihong Chen, Dr. Heather Hayton, Dr. Dave Limburg, and Dr. Diya Abdo on the Chinese Wall, Hadrian’s Wall, the Berlin Wall, and the West Bank Wall respectively. Although walls are typically associated with isolation, these speakers beautifully and eloquently spoke of the ways these walls act as forces of unification, resilience, and exchange. 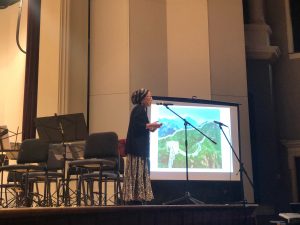 The last portion of the program consisted of guitarists of all ages from different parts of the triad. Conducted by Dr. Kami Rowan and produced by Sergio Assad, this performance was prolific. The orchestra’s emotive facial expressions and sure fingers sung the tale of the immigrant experience. Sometimes inspiring pain, inciting triumph, evoking fear, and igniting awe, the five pieces took the listener on a historical and cultural journey through centuries.

All proceeds of the U.S. premiere of “The Walls” went to Every Campus a Refuge. These donations will help settle another family on Guilford’s campus during the month of October, adding to the 42 refugees previously hosted by ECAR. A huge appreciation extends to all who attended this event; your support and presence were vital to this program’s success.