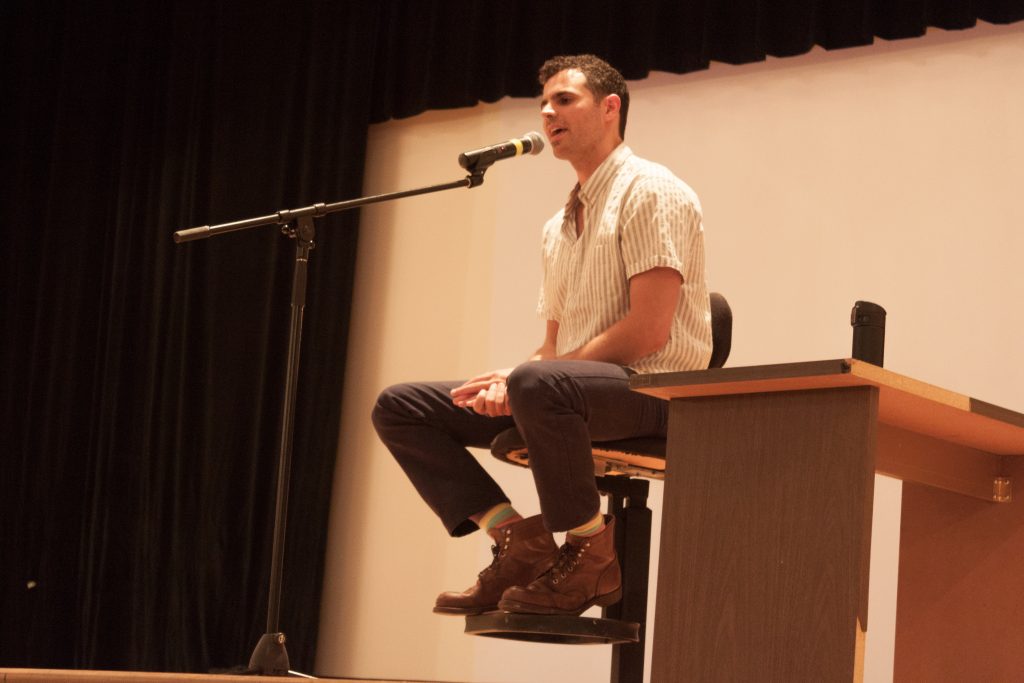 On August 23rd, Ben Tumin came to Guilford College to present his talk “Monsters to Destroy” (M2D). Tumin is a filmmaker and comedian from New York combining humor, wit, facts, and storytelling to counter the narrative that refugees are a danger to national security. Tumin has a B.A. in History from Pomona College and has worked with various U.S. and international organizations to better understand the lives and experiences of refugees. Of German Jewish descent, Tumin wove together his own stories with the stories of five Syrian refugees portrayed through amusing interview clips. By doing so, Tumin revealed the connections he drew between the violence that his family endured and the incessant violence that people with the status of refugees endure throughout their lives.

He began with a question: Do refugees threaten national security? Most people who ask this question assume that refugees are inherently dangerous and violent, feeding into the narrative of refugees as potential terrorists. Throughout his presentation, Tumin avidly answers this question with a “no.” He reveals that of the 3,252,493 resettled refugees entering the United States from 1975 until 2015 20 were “terrorists.” Of those 20, 3 of them killed a total of 3 people. As an alternate statistic, in that same exact time period, 16 cows had rebelled against their owners killing 16 people total, meaning that it is statistically more likely to be killed by a homicidal cow than to be killed by a refugee in America.

Not only do refugees not threaten national security, they help boost the economy. In a study released by the White House in 2017, refugees were proven to provide a positive net fiscal impact of 63 billion dollars. Net fiscal impact also takes into account the impact on wages, directly refuting the notion that refugees are stealing American jobs and, in fact, help produce a middle-class job force as many refugees are forced to take jobs in lower skilled labor. Statistically it could be argued that refugees strengthen national security because the more money a country has, the more money is invested in defense.

The second question that Tumin addresses—because it typically arises when talking about refugees—follows: Why didn’t they [refugees] stay and fight? For this Tumin begins talking about his family and how two SS soldiers knocked on his grandparent’s door earlier in the day on Kristallnacht (“Night of Broken Glass”) and told them to report to the nearest police station so they could be sent to a concentration camp. Instead of reporting, Tumin’s grandfather convinced some parts of his family to flee and live; however, some of them stayed. All of his family members who stayed were killed in the Holocaust. This same narrative can apply to some of the Syrian refugees who think it wiser to leave and preserve their heritage than to die in a state that gave them the options of joining ISIS, the Syrian military, or be put in a prison and tortured. So the question “Why didn’t they stay and fight” which frames refugees as cowardly and lazy is almost equivalent to asking a Jew during the Holocaust “Why didn’t they want to be sent to a concentration camp?”

Narratives that fuel the War on Terror and narratives that vilify and deny help to refugees can in some ways be synonymous. In the same way that the reason 61% of Americans in 1939 wanted to refuse entry to Jews was the threat they would be Nazi spies. Indeed, it doesn’t become surprising that of 100,000 Jewish citizens that resettled to the United States during WWII, one was a confirmed Nazi spy. So clearly it is not facts that become the basis of public opinion, but the narratives created and distributed to the American people that denied aid to Jews in the Holocaust and continue to deny aid to refugees all over the world whose goal is the not-so-simple one of survival. The monstrous act of refusing to take refugees only feeds the narrative of ISIS that there exists a war between ISIS and America. As Tumin boldly asserts, through refusal and intolerance we become the “monsters we aim to destroy.” Indeed, our best defense against terrorism is remembering our humanity and practicing compassion, for these principles do not exist in the mantra of monsters.