On January 9th, 2018 Every Campus A Refuge entered the world stage. The United Nations hosted a Together Campaign Summit in New York City to showcase different initiatives around the globe that provide a wide range of support to refugees and migrants. Guilford was among ten colleges and universities that were invited to attend the Summit.

Krista Clark, professor at Guilford College who also teaches in the ECAR minor, participated in the Summit. She says that “the environment was surreal. So many international voices and faces. I have always wanted to visit the UN in NYC and so I really just stood outside the main building and then inside the main building in awe.” The UN is a place for international conversation and collaboration — a place where solutions go to marinade in minds from around the world so as to look at an old problem with new eyes. 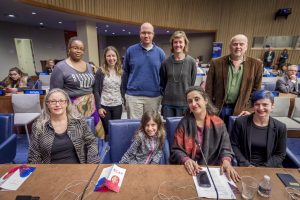 Another participant, ECAR program coordinator Hali Rose Kohls says, “Being around students, faculty and staff from universities all over the world who provided services to refugees was thrilling and inspiring. This work can be very draining at times, but I came out of the summit feeling rejuvenated and excited to get back to creating a refuge on our campus.” Kohls says that ECAR was one of the few organizations there that “offered a tangible spectrum of resources to offer to newcomers to Greensboro.”

Jonathan Maj, secretary of ECAR and digital media specialist, remembers ECAR standing out from the crowd. During Diya’s keynote, Maj recalls how “She also discussed how college campuses can do more than just spread knowledge by using the ECAR model as a means of experiential learning.” This aspect of experiential learning makes the program more adept at handling the complex problems that refugees face upon arrival. ECAR learns by doing, letting the talk in the classroom transmit into social impact. The ECAR minor shows rather than tells the dedication that Guilford College has to alleviating problems of refugees to Greensboro. 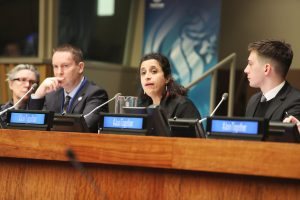 Clark also mentions Diya’s keynote saying, “I truly love hearing Diya speak about ECAR and why this program was so important to her in fulfilling the hopes and dreams of her lived experience.  She speaks with such eloquence and compassion.” In her speech, Diya spoke about the idea of radical hospitality. Krista Craven, ECAR delegate and Guilford professor, details the feeling of excitement upon seeing “that there were universities around the world committed to addressing the refugee crisis and engage in the idea of radical hospitality.”

New York City presented an entirely different set of challenges to Summit attendees. Maj walked “16 miles in basically 1 day around the city just so I could see as much of midtown in between obligations at the UN.”  This is no small task when taking into account inclement weather at the time of the Summit. On the other hand, Clark took a different approach and learned how to use Lyft saying “I loved learning something new about navigating a city.” 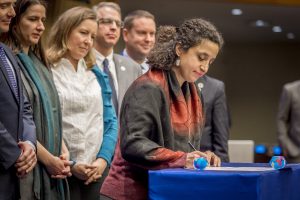 In the last moments of their trip, ECAR delegates had the opportunity to meet delegates of the Quaker UN. “I had no idea that Quakers had their own entity within the United Nations,” Kohls states, “connecting with other Quakers around the world to help foster peace and good relations. It was really neat to learn about what they do.”

The work of Dr. Abdo and dedicated ECAR supporters embodies true devotion to solving the refugee crisis. Craven is not alone when she says it is “great to see ECAR get the international recognition that it deserves.”